February saw the completion of the sixth annual frigatebird survey at Aldabra Atoll in the SW Indian Ocean. END_OF_DOCUMENT_TOKEN_TO_BE_REPLACED

The Republic of Seychelles with its many small islands and abundantly rich tropical seas makes it an ideal location for seabirds to thrive. They can use the islands to rest and breed whilst food is readily available offshore. END_OF_DOCUMENT_TOKEN_TO_BE_REPLACED

Living life on Cousin Island is often equivalent to living in an Attenborough documentary or a living laboratory. Whilst tourists are exposed to an excellent taster during their one and a half hour tour of Cousin Island Special Reserve, its only through living on the Island and total immersion in the wildlife that you get to see some truly interesting behavior. END_OF_DOCUMENT_TOKEN_TO_BE_REPLACED

(Seychelles News Agency 10th August 2014) – It’s the first conservation success story of its kind in the world: the Seychelles warbler (Acrocephalus sechellensis) was one of the most threatened bird species in the world in the 1960s – down to a total population of only 26 birds, conservation experts had to move fast to avert the birds from becoming entirely extinct. END_OF_DOCUMENT_TOKEN_TO_BE_REPLACED

Parenting: Top points go to White-tailed Tropicbirds for the most successful parenting with 57% of chicks fledging. Whilst the White Terns and Lesser Noddys had significant losses throughout the chick rearing process the worst parenting goes to the Brown Noddy. Surveillance of a Brown Noddy Colony on one site showed some rather worrying behavior; Chicks were perhaps too close to other parents resulting in chick swapping, chick sitting, chick abandonment and chick murder! The result was eventually all chicks in this area were dead before reaching C2 stage. END_OF_DOCUMENT_TOKEN_TO_BE_REPLACED 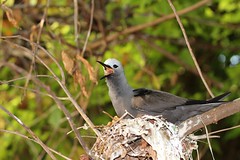